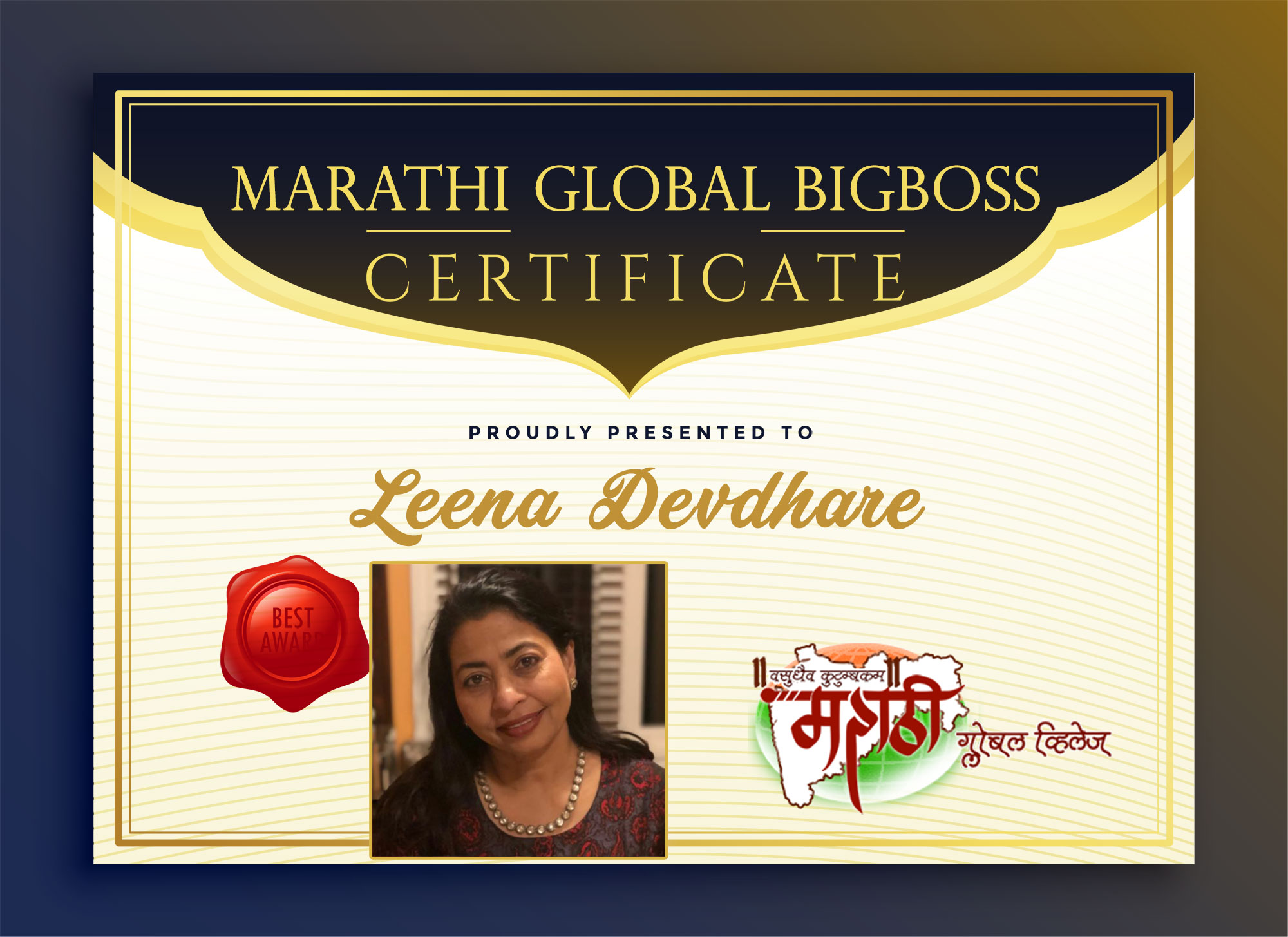 Leena is living in Canada for the last twenty-seven years, and prior to that in New York for six years. she

has been involved in community activities continuously throughout her life.

Leena is a great asset for Marathi community here in Canada and US. She is also involved in community work, social work for many voluntary organizations in Canada, and US. She served as an elected President, secretary, treasurer, an executive committee member for various organisations in Canada and America for last thirty-five years. As a Executive Member of MBM Toronto, she was Editor of the Magazine and news letter of MBM for many years.

She has been awarded as Pride of India, and a recipient of Bhaskar Award 2013 by Maharashtra Journalists foundation.

By nature, she is an artist, her passion for life is Performing and Visual arts, formally trained in dramatics and Indian classical dance and have been involved in acting on Stage plays, movies, dance and choreography. Produced and conceptualized dance drama .She herself  is a excellent kathak dancer having a Diploma in Interior design from J.J. School of Arts, Mumbai and a Certificate from fashion Institute of Technology, NY.She has created exceptional dancers and arranged Kathak Mahotsav, an annual four-day classical dance festival, international literature convention, and one more feather in a cap is she arranged a festival of three and a half days, which included group discussions, poetry recital, short stories, column. Leena also enjoys oil paintings, sketching and photography

She is founder, and on board of Directors of MEHAR Mental and Emotional Health Awareness

Renaissance, a non-profit Organization focused on creating awareness through performing arts and visual arts. Conceptualizing this unique way of fighting the social stigma of mental heath.

She was the president of an Indian cultural organization, Marathi bhashik Mandal, Toronto.

Writing and, interactive panel sessions on various genres of literature.

Leena initiated the concept of Marathi Shala and devised a uniform curriculum for the Marathi language learning in all the North American cities. The project has been executed successfully,

She created a curriculum and a teacher manual which got affiliation from a well-known University. With her hard work and initiative,

currently three tier certified standardized tests are conducted in 36 North American cities and more than 1000 students are benefiting from this project.