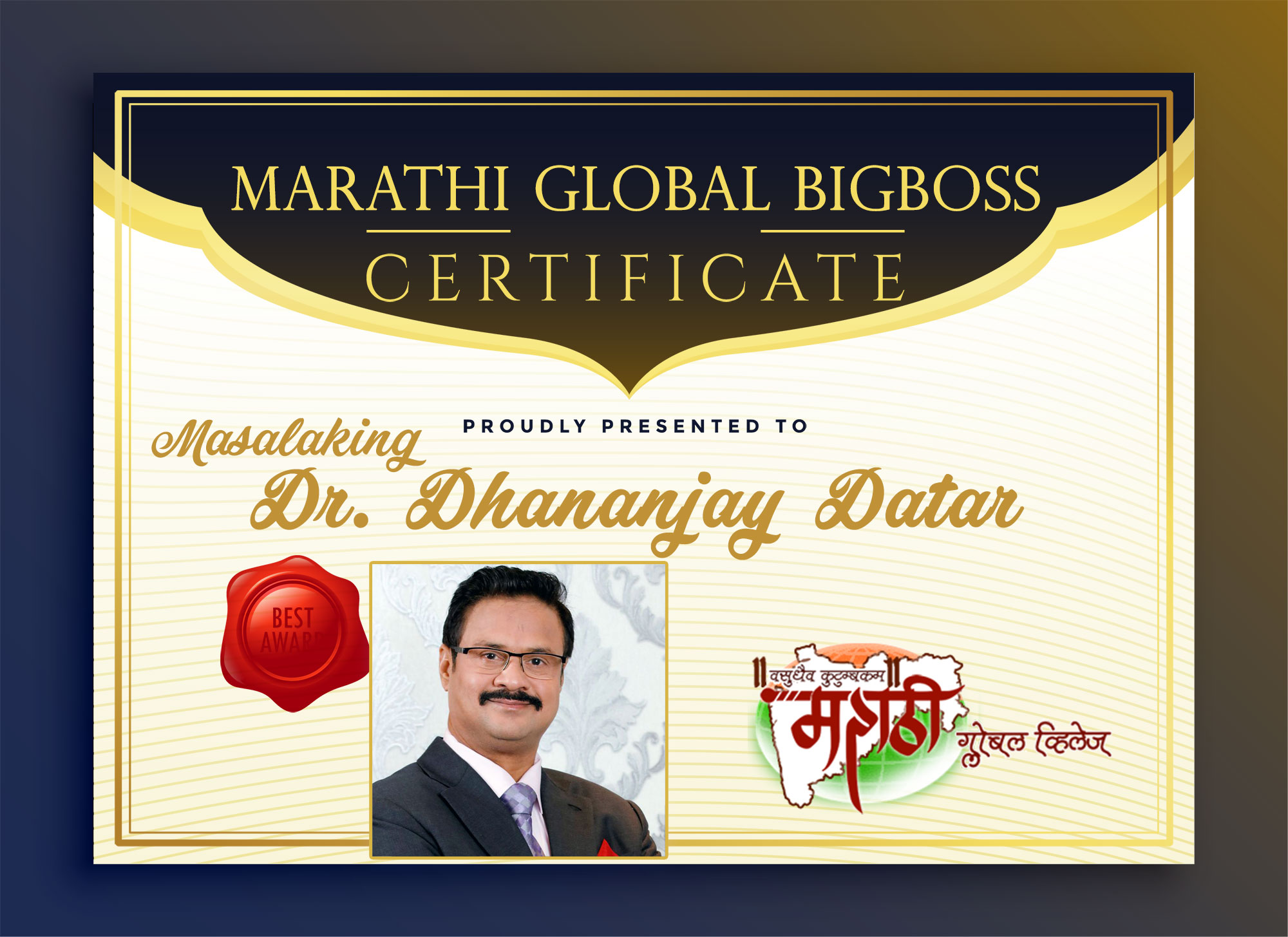 Dr. Dhananjay Datar, popularly known as Masala Kings is a leading example of an entrepreneur who has become noted as a leading business man on account of his resounding success. His growth is remarkable !

Dr. Datar who also happens to be a Doctor in Business Administration, has single headedly raised the profile of Al adil from a small grocery in Bur Dubai to a chain of 30 retail stores spread across the GCC. Dr. Datar attributes his success to his father, Late Mahadeo Datar. He feels that the company has managed to overcome every struggle with the encouragement and support of their well-wishers and customers. Having started off with just three employees, today the group employs 500 employees directly and about 375 indirectly in the UAE and in India. Due to the efforts of Dr. Datar, the company has been able to retain the loyalty of its customers for a phenomenal period of time. It can be stated that being known as the Spice King of one of the leading chains of specialty supermarkets in the UAE, Bahrain, Oman, Saudi Arabia & India is surely no mean feat. For Datar it is a matter of great pleasure and distinction he feels really honoured for this recognition.

Dr. Datar attributes the secrets of his success to total determination and dedication towards business. He feels that it does not matter whether the business is small or big. What is important is efficiently and effectively catering to customer satisfaction. His advice to the future entrepreneurs is to have a dream and to work hard to pursue it.

Today, Masala King Trading has become a household name among Indians and other nationalities in the UAE, with 34 outlets (Companies) – in GCC & India. The secret of its success is that it knows the pulse of the expatriate Indian community, having mastered the art of sourcing the right products to its customers at the right time, be it a favourite brand or pickle or papad, or the rarest of herbs and spices. So much so that the market wisdom is that at Masala King you will always get what you want!

The company has set up a manufacturing unit in the Al Quoz industrial area of Dubai where it produces masalas, spices, pickles, flours, pulses and other Indian foodstuff items under the Peacock brand name. It also has an Indian arm, Masala King Exports in Mumbai (India), which is one of the leading exporters of quality branded Indian pulses, spices and other grocery items as well as non-food Items in the Indian sub-continent.

Today Masala King Trading sells an entire range of grocery and household items, including Indian spices and Masala, pulses, rice and flour, oils and ghee, pickles and chutneys, tea and coffee, canned and instant foods, ayurvedic medicines and herbs, cosmetics, dry fruits, mouth fresheners and savouries, confectionery items and sweetmeats & more than 4500 items from all over the world.

The history of MASALA KING EXPORTS TRADING PVT. LTD is reminiscent of the tales of the spice traders of yore who left India’s shores for the distant markets of Gulf, USA, Canada, and Europe.

Dhananjay Datar came to Dubai as a 20-year-old in 1984 to join his late father Mahadeo Datar in setting up a small shop in the crowded alleys of Bur Dubai to sell Indian spices and condiments. Mahadeo Datar had come to Dubai earlier in 1975 after serving a stint in the Air India, spending the next decade working as a grocer in Jebel Ali.

That was the time when the emirate was moving into the fast track of development, with its Asian expatriate community growing in leaps and bounds. Away from home, these people longed for the taste of home-cooked food, creating a healthy demand for Indian spices, condiments, pulses and other foodstuff – an opportunity that was eagerly seized by the entrepreneurial Datars.

The early days were not easy, as it involved lot of hard work and patience for the father and son duo to establish their success. However, word-of-mouth publicity about the quality of their products soon began attracting a steady flow of expatriate clients from faraway Gulf countries Like UAE, Bahrain, Oman, Saudi Arabia, & India

GIVING TO THE WORLD A TASTE OF INDIA

Ever since its inception in 1984, the Masala King Exports Trading endeavored to establish its presence through innovation and quality. Over the years, the Group moved in tandem with the remarkable progress of UAE, exceeding the expectations of its customers and stakeholders alike. From a small grocery store to a 34-company enterprise, the Group today has a specialist Indian supermarket chain with 33 retail outlets across Dubai, Abu Dhabi, Sharjah, Ajman, Fujairah, Bahrain, Oman, Saudi Arabia & India. This apart, it has also set up a manufacturing plant and an export division, Masala King Exports, with a focus on Indian subcontinent. Of course, the journey of this Group is dotted with tremendous success and excellence.

While talking to MGV Dhananjay datar gave his Mantra and said while carrying on the business, respect the customer and earn his respect. If you are doing business in a different state or country, you must respect the people and culture from there. In Rome, do as Romans do don’t project yourself a businessman, hastily after entering any business. One always keeps learning from one’s business. I am still learning new things of doing business. Cherish the three virtues – be hardworking, courageous and confident.